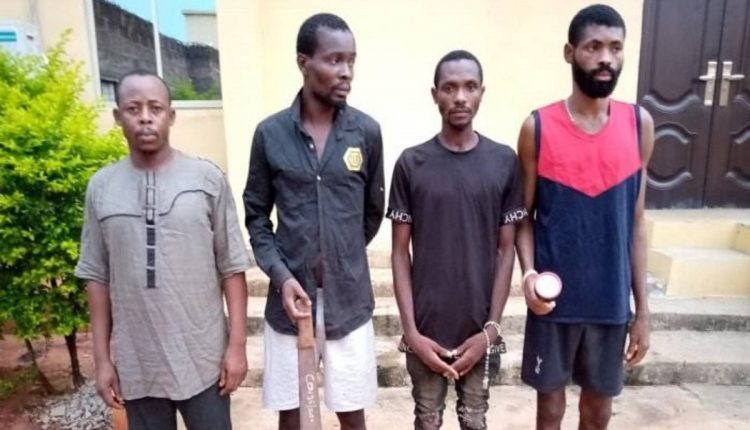 A four-man robbery gang have been nabbed in Onitsha, Anambra State, after reportedly snatching a truck loaded with 900 bags of cement at Uromi village in Edo State, which they sent to the South-East state.

The four suspects who reportedly inflicted deep machete cuts on the truck driver and left him unconscious, were identified as Chinonso Onuigbo (44), Anayo Ulugha (26), Omoke Chigozie (28), all of Orlu in Imo State and Joseph Agu (24) of Omuma, Imo State.

The Anambra State Police spokesperson, identified as Haruna Mohammed said the suspects have confessed to the crime and would be charged after investigation. The snatched truck, 900 bags of cement and a machete which they allegedly used to attack the truck driver were recovered by police officers.

“On the 26/3/2020 at about 5:30am there was a report that a Howo truck with Registration number AAA 715 YA loaded with 900 bags of cement belonging to BUA Cement Company Okpelle was snatched by a robbery syndicate at Uromi village in Edo State and the truck was diverted towards Anambra State by the suspects after allegedly inflicting deep matchete cuts on the driver leaving him unconscious.

“Following the report, Police Operatives attached to Head bridge Division in conjunction with the Command Special Anti Robbery Squad (SARS) quickly mobilised to Onitsha Headbridge and intercepted the truck leading to the arrest of the suspects.

“Suspects voluntarily confessed to have snatched the truck same date at about 4:30am and was heading to Imo State before they were intercepted.

“It would be recalled that similar incident took place few months ago between Onitsha – Owerre Road in Anambra State before the Commissioner of Police, John Abang, ordered for intensive patrols along that axis thereby forcing the syndicate to flee the State because of tight security measures put in place by the Command.”