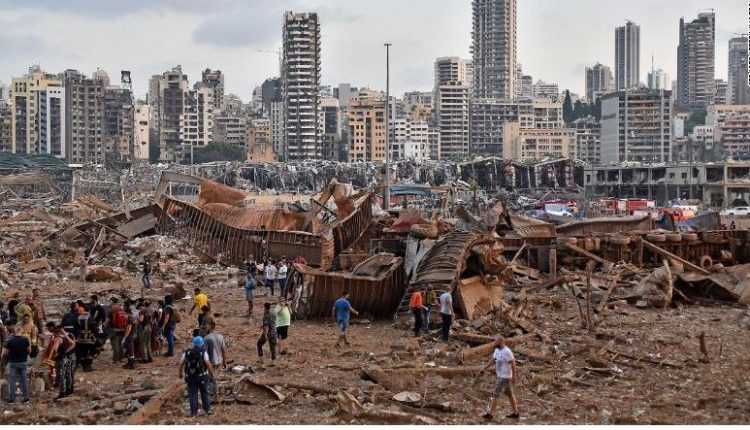 In a country already suffering the woes of hardship and pandemic, the Beirut explosion only compounds the countries problems.

It was a sad day for people in the capital city of Lebanon, as an explosion wipes out streets, kills dozens, and left scores displaced and injured.

The blast tore through the city, wreaking havoc on nearly all Beirut Quarters, resulting in a vast spread of toxic gas, that is presently a rising concern. Buildings as far as 10Km from the site of the explosion were damaged. The port of Beirut is totally destroyed.

At the time, at least 78 people have beem formally reported killed and over 4,000 wounded in the massive explosion that shook Beriut, the Lebanese capital on Beirut.

According to Lebanon’s Prime Minister, preliminary investigations state that over 2,750 tons of explosive ammonium nitrate were stored at a warehouse for over six years in the city’s port area where the blast originated from.

Here are videos of the blast at the time:

According to CNN, the region is known to be a large diaspora of expatriates and people of Lebanese descent. Already, several governments and countries including Brazilian President, Mexico, Panama, Germany, and the U.S have expressed their solidarity with the capital. Qatar, Iraq, and Kuwait are all sending help and assistance to the country

Experts say Ammonium Nitrate May Not Have Been The Only Culprit

However, in light of the recent bomb, blast, Tony May, a former explosives Investigator at the US Department of Alcohol, Tobacco, and Firearms, told CNN that on looking at the video, he believes that there were a large number of explosives or energetic materials stored at the building. May, also said that the telltale sign of ammonium nitrate explosives is a yellow smoke cloud, and is not consistent with what was seen at the scene of the blast.

May, equally says that it doesn’t mean that ammonium nitrate wasn’t involved, it just means there might be more as well”

Conflicting reports About the Beirut Explosion

Regardless of the preliminary discoveries by the Prime Ministry, there are speculations that the warehouse also contained fireworks. The explosions that rocked Beirut, was in fact double, the second bigger than the first. According to several videos posted online, colored flashes could be seen in the dark smoke rising just before the major explosion.

Currently, only 78 dead people have been accounted for and over 4,000 were injured. Among the injured was a Japanese Citizen who suffered a minor injury during the explosion. The South Korean Embassy in the vicinity also sustained minor damage from the blast.

It is even more horrifying that St George Hospital in Central Beirut, one of the biggest in the city was equally severely damaged and dozens of patients and visitors wounded by falling debris and flying glass. At the time, over 10 firefighters are reportedly missing and hospitals filled to overwhelming capacity with scores of injured people.

Wreckages After The Beirut Explosion

The Explosion which wiped out the Beirut’s northern industrial waterfront equally affected many landmarks including mosques, churches, hospitals, and universities nearby. Some notable buildings such as the Grand Serail Palace, where Lebanon’s Prime Minister is based was damaged, while shipping containers, trucks are only twisted chunks of unidentifiable metal.

In the Midst of an Economic Crisis

Already plagued with the impacts of COVID-19 having over 5,062 reported cases and 65, virus-related deaths, alongside the deep economic hardships, the blast has only served to exacerbate the country’s deep issues. Before, the COVID-19 outbreak, over 45% of people in the country, were reportedly below the poverty line. According to Social Affairs Minister Ramzi Musharrfieh, these numbers have risen up to 75%.