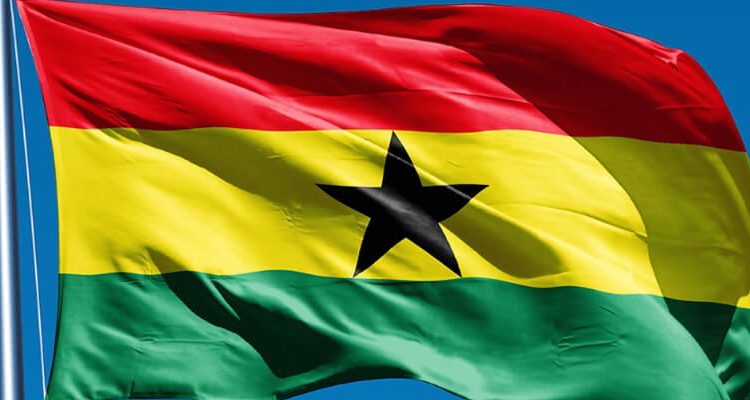 What do you need to know about Ghana flag meaning? In this article, we will learn more about the colors of the Ghana flag stand for? How many colors has the Ghana flag? And so many more.

It’s important to know more about the history of any country that you are visiting or residence. This includes the historic events, people, and things that are a part of Ghana’s history.

Like other countries in the world, Ghana has a national flag. This flag is a symbol of independence. However, the flag wasn’t created or hoisted until the independence of the country.

The United Kingdom colonized Ghana from the year 1867-1957. This period was known as the Gold Coast.

Ghana is the first sub-Saharan country in Africa to gain its independence (March 6, 1957). This is a West African Country bordering the Gulf of Guinea between Cote d’Ivoire, Togo, and Burkina Faso.

The flag of Ghana was officially hoisted in 1957 and was not flown until 1962. It was reinstated later, on February 28, 1966. The flag is made up of three horizontal stripes of red, yellow, and green with a black five-pointed star in the middle. This was the second flag in Africa, after the Ethiopian empire to use the Pan African colors.

Theodosia Salome Okoh designed the Ghana flag in 1957. She is a Ghanaian stateswoman, teacher, and artist. Born on June 13, 1922, and died on April 19, 2015. She also contributed to Ghana’s politics, sports, and education history.

Shortly after 1973, Guinea-Bissau designed their flag after the design of Ghana’s flag.

Ghana’s flag was adopted in 1957 but wasn’t flown until 1962. However, you must also look at the different flags that were used until the current Ghana flag.

Before the Gold Coast (Colonization by the British), the flag used was the Flag of the Kingdom of Ashanti.

Interesting things to know about the RCCG logo

List of West African Countries You need to Know

Much later, Mali joined the Union of African States in 1961, creating the need for another flag. This flag was used between 1961 and 1964.

However, after January 1964 constitutional referendum, Ghana adopted a variant of the 1957 tricolor with a white in the place of the yellow, after the colors of Kwame Nkrumah’s ruling, making the flag’s color similar to that of Hungary.

However, by 1966, the original single star on a yellow background was readopted following Nkrumah’s overthrow in a coup d’tat. This is Ghana’s current flag.

The red represents the blood of those who died for the country’s struggle for independence from British colonial rule. Examples of these heroes are Kwame Nkruma and Yaa Asantewa.

The yellow stands for the mineral wealth of the country, which is gold.

This stands for the country’s rich vegetation

Also known as the lodestar of freedom. It stands for African emancipation from slavery. This was inspired by the black star line. A shipping line founded by Marcus Garvey in June 1919. This is where the Ghana national football team derives its nickname “The Black Stars.”

I decided on the three colors of red, gold & green because of the geography of Ghana. Ghana lies in the tropics and blessed with rich vegetation. The color gold was influenced by the mineral-rich nature of the lands, and Red commemorates those who died or worked for the country’s independence. Then the lone five-pointed star which is the symbol of African emancipation and unity in the struggle against colonialism

Uses And Importance Of Ghana Flag

The design of the flag of Ghana was used in the following ways:

Now you know all there is to know about Ghana flag meaning. You fully understand that the flag of any country is unique and can shed insights on its history.

Interesting things to know about the RCCG logo

List of West African Countries You need to Know