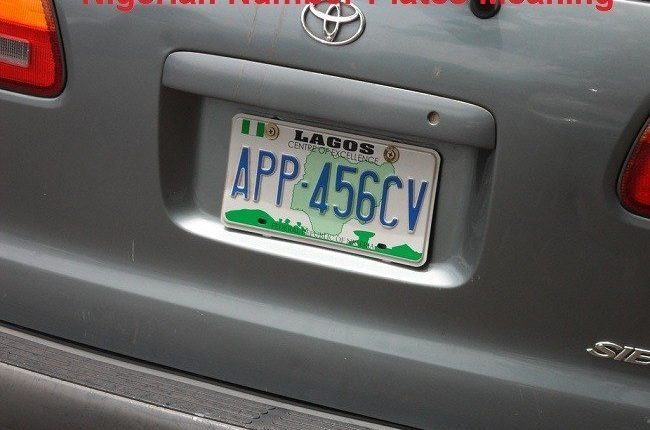 Nigerian Number Plate Meaning of Abbreviations and What They Mean

If you want to know what all the digits and number on your plate represent, this post will expound Nigerian number plate meaning of abbreviations and what they mean.

Just like we have a number plate on almost every car in all countries around the world, the same thing applies to Nigeria. Your number plate is among the established ways the government uses to identify your vehicle. Since many vehicles belong to the same model, color, and share identical features, it will not be possible to distinguish between them.

There are various formations of number plates, depending on the particular country in question. In Nigeria, the unique format looks this way, ABC-123DE. The first 3 letters, “ABC”, stand for the Local Government Area (LGA) where the vehicle registration was done, and 3 digits as well as 2 other letters come next. The 2 last letters are primarily there for numbering.

Let’s shed more light on Nigerian number plate meaning of abbreviations and what they mean.

In the unique format of Nigerian number plates mentioned above, the number series starts from 001AA to 999AA and then moves onto 001AB to 999AB, continuing in that order. As for the first 3 letter, “ABC”, this is utilized for distinguishing vehicle types in some cases.

Typically, the license plates have color white, whereas the number plate is imprinted in blue. It is possible you have seen other types of number plates apart from this, with some in color red and some in green.

The number plate is imprinted in red in commercial vehicles, green in government vehicles, and purple & green with white lettering in diplomatic vehicles.

For diplomatic number plates, the 1st 2 or 3 digits signify the country that the car owner represents, and 2 letters & numbers then come next. Also, CORPS DIPLOMATIQUE is imprinted on this exclusive plate, rather than the name of the state.

The 1st 3 letters, as earlier explained, stand for the LGA where the car registration was done, and it could be in any state in this country. While we were not able to find all the abbreviations, we got information on most of them.

We have as many as 11 different types of number plates in Nigeria, indicating various classes of vehicle owners. Since inception, this country has made use of 4 car number plates and eventually settled for the present one in 2011 that became introduced in 1992.

Let’s check the meaning of these different types of Nigerian number plates below:

A fancy number plate is used by most celebs in Nigeria. Its background is white and the lettering blue.

Mass transit, commercial vehicles, as well as school buses, all have their number plate imprinted in red letters on a white background.

This number plate type is a form of Mass Transit number plates and feature red letters on a white background.

As for private number plates, they are the most common type of number plates in this country. Whenever you hit the road, you see them around.

This type is used by public office holders, such as president, lawmaker, governor, and the likes. It is imprinted in green on a white background, and the “FG” mark can be on a government car with the type of number plate.

Imprinted in black letters on a white background, this number plates is used by members of the Nigeria Armed Forces, the military, navy, air force, and paramilitary.

Commercial number plates are seen on commercial buses, a type of mass transit. Hence, they have a similar type of design, which is white background & red letters.

These plates include the three categories below:

These plates in white letters on a black background are often temporarily used by the special task force.

Hope you’ve learned a couple of things in this post on Nigerian number plate meaning of abbreviations and what they mean. To avoid harassment or obtaining a fake number plate, the best thing is to follow the steps we have highlighted above.