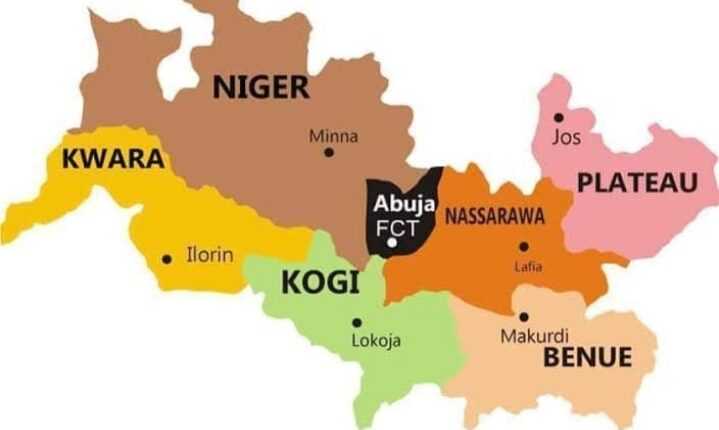 Do you wish to know the list of north central states in Nigeria? This article is your ultimate guide. So, let’s get started!

Benue state is among the north central states in Nigeria. Located in the middle belt, and bounded to the north by Nasarawa state, to the west by Kogi state, to the east by Taraba, and Cross River to the south.

Also, one of the north central states, this confluence state was the first administrative capital of Nigeria.

It is called a confluence state because this is the state where River Niger and River Benue meets. This meeting point (confluence) is in Lokoja. It was created on 27th August 1991.

It is rich in mineral resources, like coal, petroleum, limestone, steel, etc. In Benue, there are tourist attractions such as Mount Patti, Lord Lugard House, World War Cenotaph, Ogidi, the confluence of Rivers Niger and Benue, and many more. It also has a nice landscape comprising of hills and terrains perfect for hiking.

It was initially known as the West Central State. Though, it is currently among the north central states in Nigeria. Kwara state has a large population of the Yorubas and it was created on the 27th of  May, 1967

It was created on the 1st of October, 1996, and bounded by Kaduna State to the north, by Taraba State to the east, to the south by Kogi State, and to the west by the Federal Capital Territory, Abuja. It is made up of thirteen local government areas, blessed with minerals such as coal, tin, marble, barite, salt, and bauxite. It is the Home Of Solid Minerals.

Named after the River Niger, Niger State is the largest state in the country. It was created on 3rd February 1976. It has the slogan; The Power State. This is because it has a lot of dams in it, including the Kainji Dam and Shiroro Dam, which are the two major hydroelectric power stations in the country.  It also has the largest national park in Nigeria which is the Kainji National Park. It has twenty-five Local Government Areas( LGA).

I was created on 3rd February 1976, alongside Bauchi, Benue, Borno, Abuja, and Sokoto states.

It has natural rocks, hills, and waterfalls and is surrounded by rocky formations, which it derives its name. It is the home of peace and tourism. Tourist attractions in plateau include; The Shere Hills, The National Museum in Jos, The Museum of Traditional Nigerian Architecture, The Wildlife Safari Park, Solomon Lar Amusement Park, Jos Zoo, Was Rock, Aesop Falls, Kurra Falls, and many more.

Abuja or ABJ as people fondly call it, is the state capital of Nigeria. This Centre Of Unity has six local government areas.

Other landmarks include the Millennium Tower, the National Stadium, the Central Bank of Nigeria headquarters, the Nigerian Presidential Complex, the Ship House, the National Mosque, and the National Church.

Abuja is the perfect blend of all three major ethnic groups in the nation and is known for its well-mapped outbuildings.