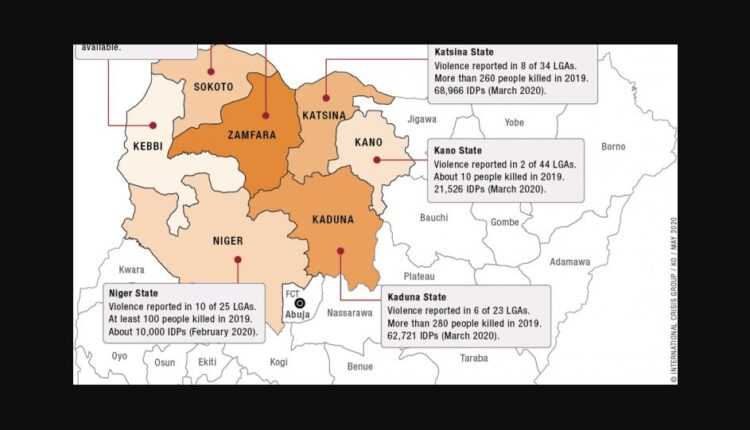 What do you know about the list of north west states in Nigeria? This article would enlighten you more. So, let’s begin!

The Northwest states in Nigeria are considered to be the largest in terms of landmass and size. Compared to the south and the east. These states are highly dominated by farmers, cattle rearers; agriculturists as a whole.

The major occupants of these states are the Hausas and Fulanis.

This blog post is a list of the states that makes up the northwestern part of the country. Their population, geographical area, and agricultural produce will also be included. Read on!

The Northwestern region of Nigeria is made up of seven (7) states.

Below are the northwest states in Nigeria:

Now let’s look at these states individually and know some facts about them.

With its capital as Dutse, Jigawa was created on 27 August 1991. It was created from the northeastern part of Kano state. Its land area is about 23,154km². Jigawa has a total population of 4,361,002 which makes it the eighth-most populated state in Nigeria. Jigawa consists of plains covered by wooded savanna in the south. And in the north covered by scrub vegetation.

The natives of this state are mostly farmers producing major crops including groundnuts, cotton, sorghum, cowpea, rice (grown in the river valley), and millet. They also herd cattle, sheep, and goats.

The Hausas and Fulanis are the major occupants of the state.

Some Academic Institutions In Jigawa State

Kaduna state is on the Kaduna River and has its capital as Kaduna. The name ‘Kaduna’ was derived from the Hausa word, ‘Kada’.

Some Academic Institutions In Kaduna State

Kano state with its capital as Kano is located on the Jakara River. It was created on May 27, 1967. The state was traditionally founded by a blacksmith of the Gaya tribe, Kano.

They exported leatherwork, cloth, and metal wares in the past, just in return for kola nuts, salt, and slaves from Ghana, the Sahara, Bauchi, and Adamawa emirates respectively. Currently, they export hides and skins majorly.

Some Academic Institutions In Kano State

Katsina also has its capital as Katsina. It is located about 260 kilometers east of Sokoto and 135 kilometers Northwest of Kano. The estimated population in 2016 was 429,000.

Some Academic Institutions In Katsina State

The capital of Kebbi state is Birnin Kebbi. Kebbi was created on August 27, 1991, out of a part of Sokoto State. Kebbi has a total land area of 36,800km². The state produces cash crops including groundnuts, rice, and cotton. They also produce millet, onions, sorghum, and cowpeas.

Fulani, Dakarki, Kamberi, and Hausa are the major ethnic groups in Kebbi state.

Some Academic Institutions In Kebbi State

Sokoto state is located near the confluence of the Rima and Sokoto River. It has its capital as Sokoto.

Some Academic Institutions In Sokoto State

The Hausas and Fulanis are major occupants of the state.

Some Academic Institutions In Zamfara State

Here you have it! These are the 7 states that make up the North-Western region of Nigeria.

From the information provided above, you would notice that the people of the north west states in Nigeria, are majorly interested in agriculture than oil and gas. This might be because they are blessed with very rich and fertile soil for planting.

Please, you can also share below, what you think about the north west states in Nigeria.