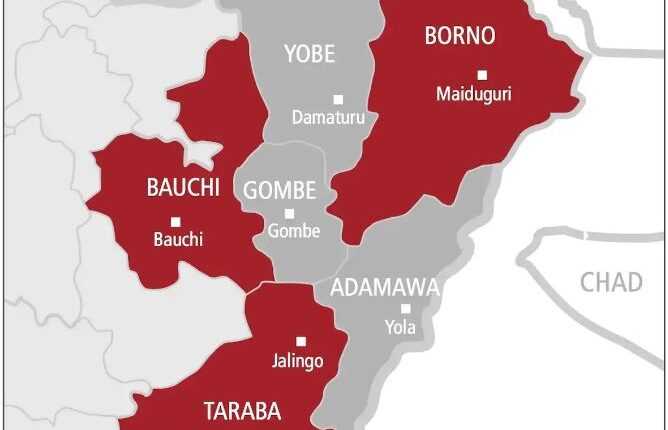 Do you know the list of northeast states in Nigeria? This article would give you the list and tell you more. So, here we go!

Nigeria is a country with a large landmass and a fast-growing population. It is also a country with a total of 36 states and six geo-political zones. Nigeria is a country that gained its independence in 1960. It can be considered as one of the fastest-growing countries when it comes to population size and landmass. Nigeria is a great country with six geo-political zones namely: northeast,  northwest, northcentral,  southeast,  southwest, and south-south. Nigeria has a landmass of approximately 923,768 sq. But today’s article is going to be focused on the states located within the northeast geo-political zone. These states include Adamawa, Gombe, Taraba, Bauchi, Borno, and Yobe. These states have a total of 23,558,674 of the country’s population as of 2011 and it is made up of people from Fulani and Kanuri with about 100 other ethnic groups.

Adamawa is a northern state located in Nigeria and it was established on the 27th of August 1991. This state was formerly referred to as Gongola state and Taraba state was carved out of it. The state can boast of his numerous universities, polytechnics, and even Institute for nursing and midwifery. It is also one of the states that constitute the 36 states of Nigeria with Yola as its capital. Furthermore, Adamawa can be regarded as a state with a large landmass and enriched with mineral and agricultural resources. The state is also known for rearing cattle and growing plants as its major source of agricultural activity. It is also the state where the American University of Nigeria is located. The affairs of the State are executed by the governor, in Person of His excellency Umaru Fintiri. As of 2007, the state had a GDP of 4.3 billion dollars and the state postcode is 640001. Adamawa state has a total number of 21 local government namely: Demsa, Fufore, Ganye, Girei, Gombi, Guyuk, Hong, Jada, Lamurde, Madagal, Yola South, Yola North, Toungo, Song, Shelleng, Numan, Mubi South, Mubi North, Michika and Mayo-Belwa.

For more details or information about the state, you can check this website: http://www.adamawastate.gov.ng/

This is another state located in the northeast of Nigeria and it is also one of the States that makes up the 36 States of Nigeria. The state capital is also referred to as Gombe. The state is mainly populated by Fulani people and the state is well-known to be a traditional state because of its traditional practices. It was created on the 1st of October 1996. It has a population of 2,346,040 people according to the 2006 census. Because the state is highly populated by Fulani people,  you can say its most practiced religion in that area is Islam and a little bit of Christianity in a few areas. The affairs of the state are executed by the governor, in Person of Muhammad Inuwa Yahaya, alongside his deputy Manassah Jatau. Gombe state is ranked 33 out of 36 states in Nigeria. As of 2007, the state had a GDP of 2.50 billion dollars. It consists of 11 local government areas namely: Akko, Balanga, Billiri, Dukku, Funakaye, Gombe, Kaltungo, Kwami, Nafada, Shongom. For more details or information about the state, you can check this website:  gombestate.gov.ng

Taraba state is a northeastern state in Nigeria and it was named after the Taraba river and has  Jalingo as its capital. The state is also populated with Fulani people and mixed with other tribes from different ethnic groups. The state was also cut out from the Gongola state on the 27th of August 1991 under the military regime of General Babangida. Also, the state is ranked number 30 out of the 36 States in Nigeria and as of 2007 had a GDP of 3.4 billion dollars and a population of 2,294,000 people according to the 2006 census. The state also has a postcode of 660001. The affairs of this state are executed by the governor, in Person of Darius Dickson Ishaku,  alongside his deputy Haruna Manu. The state is also a state whereby agriculture is a major activity and a source of income for individuals living in this state. The state has a total of 16 local governments and the affairs of each local government are run by the local government chairmen. These local government areas include Wukari, Zing, Lau, Sardauna, Takum, Ussa, Yorro, Ardo Kola, Bali, Donga, Gashaka, Gassol, Ibi, Jalingo, Karim Lamido, and Kurmi. For more details and information about the state, you can check the website tarabastate.gov.ng

The State of Bauchi is another northeastern state in Nigeria. It was formerly known as Yakoba state and was founded by Yaqub ibn Dadi. The first prime minister of Nigeria Abubakar Tafawa Balewa was buried in the state and the state is also known to have a library board that was established in 1975 and the state is located along the Port Harcourt to Maiduguri railway line. Bauchi is a wonderful state filled with tourist views and centers. The state also has Bauchi as its capital and a total of 20 local government namely: Bauchi, Tafawa Balewa, Dass, Toro, Bogoro, Ningi, Warji, Ganjuwa, Kirfi, Alkaleri, Darazo, Misau, Giade, Shira, Jama’are, Katagum, Itas/Gadau, Zaki, Gamawa and Damban. The affairs of the state are executed by the governor in Person of Bala Mohammed.

Borno is another northeastern state of Nigeria and it was formed in 1976. The state has a slogan known as “home for peace” and its capital is the largest city in Borno, known as Maiduguri. Borno state is the Homeland for the people of Kanuri. In 2007, the state had a GDP of 5.8 billion dollars and in 2006 the state had a population of 4,174,104 people. This state is filled with hard-working people both from Kanuri and other ethnic groups. The affairs of the state are being governed by the governor of the State,  in Person of Babagana Umara Zulum. The States postcode is 600001 and it has a total of 27 local government located in 3 senatorial districts, namely:

This is another northeastern state in Nigeria and it was formed on the 27th of August 1991. It was carved out of Borno State. This state is majorly referred to as an agricultural state because of its huge agricultural activities. Damaturu serves as the capital of the state. Also, the affairs of the state are governed by the governor of the State, in Person of Mai Mala Buni. Yobe state is blessed with agricultural soils and other mineral resources. The state has a total of 17 local governments namely: Nguru, Potiskum, Tarmuwa, Yunusari, Yusufari, Fune, Jakusko, Karasuwa, Machina, Nangere, Fika, Gulani, Gujba, Geidam, Damaturu, Bursari, and Bade.