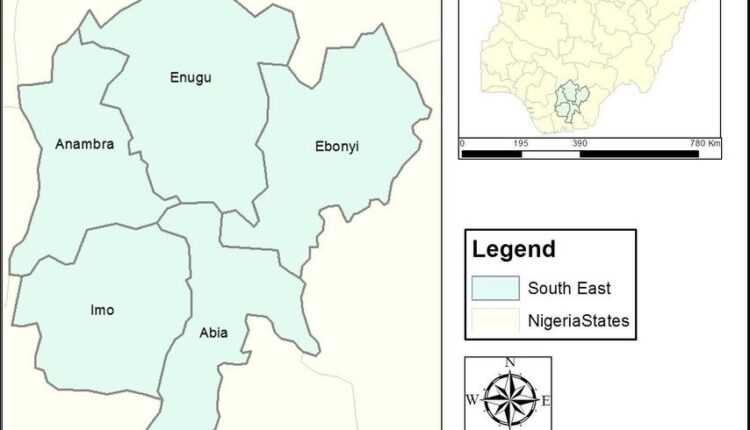 Longing to know the southeast states in Nigeria? This article is the ultimate guide for you. So, let’s begin!

The South-Eastern part of Nigeria is one of the six(6) geopolitical zones in the country.

This geopolitical zone was carved out in 1967 from Eastern Nigeria. This was between 1967 and 1975, during the Gowon administration.

This region is dominated by the Igbo speaking states and Igbo is their major language. They have a smaller landmass when compared with the northwest states. These states are rich in mineral resources and the natives are said to be industrious.

This blog post is a list of the southeast states in Nigeria. Notable facts about them, such as their natural resources and tertiary institutions would also be included.

The southeastern region of Nigeria is made up of five (5) states.

The southeast states in Nigeria include:

Now let’s look at some facts about the individual states; starting with the first on the list; Abia State.

With its capital as Umuahia, Abia State was created in 1991. It has Aba as one of its major commercial hubs and cities. The state is bounded to Imo State by the west, and it was carved out from it.

Abia state occupies a geographical area of 6,320km² in size. When it comes to rivers, the Imo and Aba rivers are the most important in the state.

Also, Abia is one of the oil and gas producing states in Nigeria and produces up to 36,000 barrels of crude oil per day. It contributes over 25% of the state’s GDP.

The Universities and polytechnics situated in this state include:

Awka as its capital, Anambra state shares boundaries with Delta, Enugu, Kogi, and Imo and Rivers; to the west, east, north, and south respectively. The state’s slogan is ‘Light of the nation’.

It has Onitsha as it’s a major commercial hub. Reason being that Onitsha is the most important area of the state where businesses are done daily.

The state has 21 local government areas with Nnewi town, considered to produce the richest Igbo businessmen within the state.

Natural gas, crude oil, bauxite are some of the natural resources found in Anambra State.

The universities situated in this state include:

With Abakaliki as its capital, Ebonyi State was created in 1996. It was created during the military era. The state was carved out from Enugu and Abia state. Its slogan is ‘salt of the nation’. Ebonyi has 13 Local Government Areas.

This state is known for its large salt deposit at the Uburu and Okposi Salt Lakes.

The tertiary institutions situated in this state include:

Enugu is the capital of Enugu State. Enugu state was created in 1991 from old Anambra during Babaginda’s regime. The state’s slogan is ‘coal city’. This might be because it has an abundance of natural resources. It is a major state in the southeastern region of Nigeria.

During the time of the British colonization in the country, the state’s coals were mined in great quantity and transported to England.

The major cities in the state are Enugu, Nsukka, Agbani, and Awgu.

This state houses the first indigenous university in Nigeria, the University of Nigeria, Nsukka (UNN).

Other prominent universities in the state include:

Owerri is the capital of Imo State, and it happens to be the state’s largest city. Imo is considered to be the richest Igbo speaking states in Nigeria.

The state is also one of the oil-producing states in the country. Crude oil, natural gas, calcium carbonate, zinc, and lead are some of the natural resources found in the state.

Imo State houses major petroleum companies; in the likes of Addax petroleum, Agip, Chevron Corporation, and Royal Dutch Shell. There are 163 oil wells at 12 different locations in the state.

Some notable tertiary institutions situated in this state include:

During the Nigerian Civil War, the southeastern region was initially divided into twelve (12) states. This was later divided into these five (5) states listed above.

With the information above, you would see that there are a lot of mineral resources found in these regions of Nigeria. Some of which include; coal, natural gas, bronze, crude oil, and others.