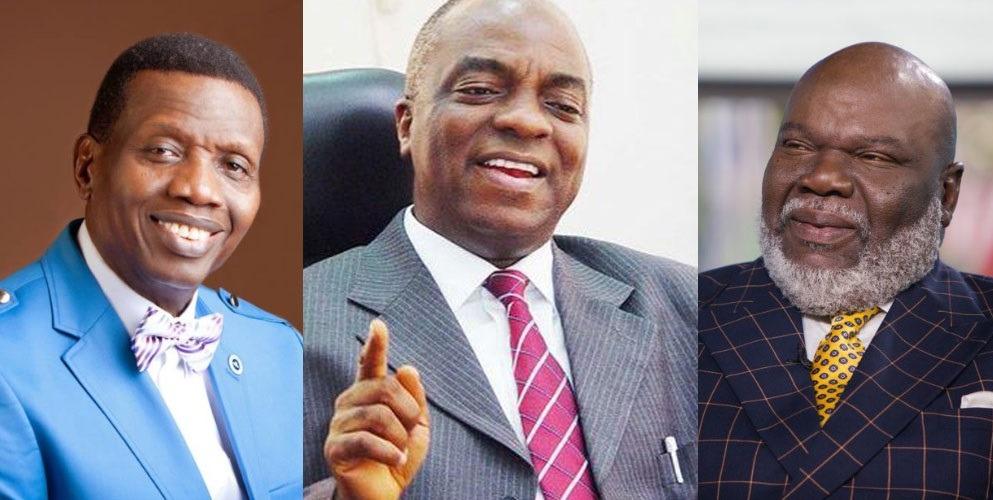 Top 10 Richest Pastors in the world

Christianity is now an established business path. Nigerian pastors not only preach about salvation but have rallies tithes, gifts and offerings as products of Christianity are now the richest pastors in the world.

In this article, we will discuss the ten wealthiest pastors.

Bishop David Oyedepo is the founder and leading pastor of Living Faith World Outreach Ministry Aka Winners Chapel International with over 50,000 members and branches in over 300 cities all over the world like 45 African nations, United States, United Kingdom.

He is a businessman and owns two universities: Covenant University and Landmark University. He is an author and a publisher. He holds four private jets, several fancy cars, and buildings around the world.

Faith Tabernacle (headquarters) has a capacity of 50,000 seats and was recorded on the Guinness Book of Records as the largest church auditorium in the world.

Bishop T.D Jakes holds second the world’s second-richest pastor in the world with a net worth of $147 million. He is the founder of The Potter’s House a megachurch in America with a capacity of over 30,000 worshippers. He is an author, a filmmaker, an actor and a singer. His church services programs are broadcasted on The Poster’s Touch which is shown on The Word Network, Lightsource.com.

Pastor Chris Oyakhilome is the third richest pastor in the world with a net worth of $50 million. He is the founder of Believers Loveworld known as The Christ Embassy Church. He is popularly known for performing miracles which made him have over 40,000 members in his church. His wealth is gotten from investments in hotels, TV stations, magazines, and real estate.

Pastor Joel Scott Osteen is the fourth wealthiest pastor in the world with a net worth between $40 million to $60 million. He is the head Pastor at the church his father John Osteen founded Lakewood Church. He is an author and also does evangelism on TV that is broadcasted to over 7 million viewers weekly and over 20 million viewers monthly in over 100 countries.

He has written over ten books that made it to number one on The New York Times Best Seller List.

Pastor Enoch Adeboye is the fifth richest pastor in t he world with a net worth of $39 million. He is first ordained as a Pastor in the Redeem Christian Church Of God in 1977 before he became the General Overseer in 1981. The church has over 18,000 branches in Nigeria and several branches in 196 around the world. He is among the Pastors that own a Private Jet and also the church is the owner of Redeemers University.

Pastor Creflo Dollar is the sixth wealthiest pastor in the world with a net worth of $27 million. He is the founder of World Changers Church International based in Georgia, United States. He is also the head of Creflo Dollar Ministerial Association and Arrow Records.

He guides a congregation of about 30,000 people, and he lives a lavish lifestyle owning a Private Jet, 2 Rolls Royce, and extraordinary Mansions.

Kenneth Max Copeland is the seventh wealthiest pastor in the world with a net worth of $25 million. He is the founder of Kenneth Copeland Ministries which was built on 1500 acres of land. He is also a speaker, an author, televangelist aside been a pastor.

He lives an extravagant life and owns a Private jet, Mansions, and expensive cars.

He founded Orlando Christian Center in 1983 where he performs healings and miracles. His crusade holds at large stadiums and auditorium across the United States and around the world. He is hailed initially from Israel; he is an author and has published many books which many pastors learn from.

Pastor Temitope Balogun Joshua is popularly known as T.B. He is the founder of Synagogue Church of All Nations. He has the highest social media followers with 3,500,000 fans on Facebook and 1,000,000 followers’ subscribers.

He owns a Christian television network called Emmanuel TV. He is a minister, a televangelist and a philanthropist.

The last on the list is a pastor Singapore, Joseph Prince. He is the senior pastor of one of the largest churches in Asia, the New Creation Church in Singapore. He is a TV host of a church program called ”Destined to Reign” and has published two Christian books.

He worked as an IT consultant before being appointed to the post of a pastor. He has preached in different countries around the world, including the United States, Indonesia, Australia, and Canada.