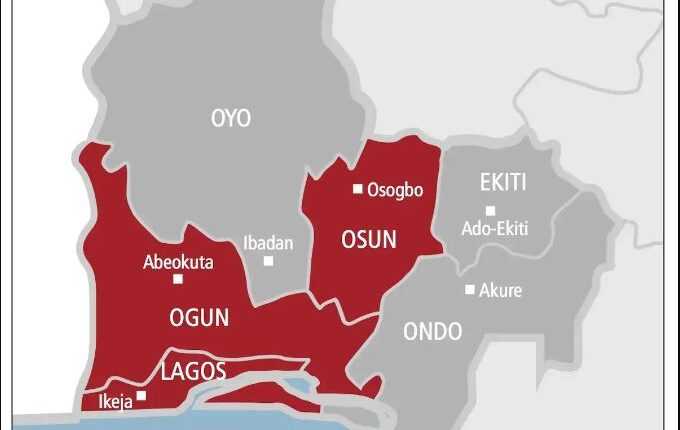 Longing to know about the list of south west states in Nigeria? This article would tell you about them. So, let’s get started!

Nigeria is a big country filled with beautiful people. This country is grouped into six geopolitical zones namely: the North Central (NC), North East (NE), North West (NW), South West (SW), South East (SE), and South (SS). Each of these zones is made up of states that make up the 36 states in Nigeria. In this article, we are going to be focusing on one of the geopolitical zone known as the Southwest. The southwest of Nigeria is a geopolitical zone made up of six states, namely: Ekiti, Ondo, Osun, Oyo, Ogun, and Lagos. The people in the southwest geopolitical zone, are majorly referred to as the Yoruba people because it is highly populated by a unique tribe called Yoruba. Each of the states under this zone is the hometown of many Yoruba people and we are going to look at them one after the other.

The first state under the southwest geopolitical zone and on our list is Ekiti state. The state bears the slogan “Land of Honour and Integrity” and has Ado-Ekiti as its capital. The state was created out of the old Ondo state on the 1st of October 1996 under General Sanni Abacha’s regime and it’s made up of 16 local government areas, namely: Ado-Ekiti, Ikere, Oye, Aiyekire (Gbonyin), Efon, Ekiti East, Ekiti South-West, Ekiti West, Emure, Ido-Osi, Ijero, Ikole, Ilejemeje, Irepodun/Ifelodun, Ise/Orun, and Moba.

The state is one of the states in Nigeria that had a system of governance and running its affairs before the arrival of the colonial masters. Ekiti state is the home of various professors and other influential people, that’s why it is popularly referred to as the foundation of knowledge because of the different brainiacs the state has produced.

The state of Ekiti is filled with Yoruba people that speak a form of Yoruba, known as “Ekiti” and its people tie their heritage and history to Oduduwa, the father and progenitor of the Yoruba race.

In Ekiti, their major source of income is agriculture and this activity has engaged most of their population and generated money. Ekiti people specialize in both food and cash crops. Food crops like yam, cassava, rice, and cowpea while cash crops like cocoa, oil, kola nut, banana, and others.

The state is filled with tourist sites like Wooden Walkway of Ikogosi Cold and Warm Spring, The elephant-like tree, Mountain view Ilawe Ekiti and many more. The affairs of the state are governed by the Governor, John Olukayode Fayemi, and Deputy Governor Otunba Bisi Egbeyemi. Notable people from Ekiti include Sola Sobowale, Falz, Niniola Apata, Otunba Bisi Egbeyemi John Olukayode Fayemi, and others.

Ondo is one of the states that makes up the southwest geopolitical zone and the state is so big that Ekiti was even drafted out of it. The state was created on the 3rd of February 1976 from the then western state and has Akure has its capital. Ondo state is made up of 18 local Government Areas, namely: Akoko North-East, Akoko North-West, Akoko South-East, Akoko South-West, Akure North, Akure South, Ese Odo, Idanre, Ifedore, Ilaje, Ile Oluji/Okeigbo, Ondo West, Ondo East, Irele, Odigbo, Okitipupa, Ose, and Owo. Also, the state is well known for its slogan Sunshine State and it is majorly populated by Yoruba people from different Yoruba groups known as their tribe or clan, they include Akoko, Akure, Ikale, Ilaje, Ondo, and Owo.

Also, Ondo is a place with hard-working people who are farmers and fishermen, these people are well known to be friendly and accomodating.

The affairs of this big state are governed by the Governor in the person of Oluwarotimi Odunayo Akeredolu and Deputy Governor Agboola Ajayi. If you ever visit Ondo state, there are tourist centers you must check out like Idanre hills, Owo Museum of Antiques, Ebomi Lake Tourist center, Igbokoada waterfall, and many more. Notable people from Ondo state include Waje, King Sunny Adé, Mo Abudu, Omotola Jalade Ekeinde Ayo Makun, and many more.

Osun is another indigenous state that makes up the six states of the southwest geopolitical area. Osun was established in 1991 from Oyo state and got its name from the River Osun. It is the homeland of many influential people from Nigeria and it has Oshogbo as its capital.

People from other countries come to attend the Osun state festival just because of the wonderful experience that comes with the festival. Like, I said earlier, Osun state is the homeland of many influential people in Nigeria. The likes of Toyin Adegbola, Isiaka Adeleke, Enoch Adeboye, Rauf Aregbesola, Davido, and others. The affairs of the state are governed by  Governor Adegboyega Oyetola and Deputy Governor Benedict Gboyega Alabi.

Oyo is another big state that makes up the southwest geopolitical zone and from this state, the Osun state was formed. It is one of the biggest states in Nigeria when it comes to landmass and reputation. It was formed from the Western state in 1976 and it is majorly populated by Yoruba people.

When it comes to education, you can say Oyo is a state to reckon with. It has the first University in Nigeria, which is known as The University of Ibadan, established in 1948.

Oyo state has other universities like Ladoke Akintola University of Technology, Ogbomoso, Lead City University, Ibadan, Dominican University Ibadan, and others. We must say that Ibadan is a state filled with cultural heritage and tourist centers, so whenever you find yourself in Oyo state, try to visit places like Old Oyo National Park, The National Museum of Unity, Cocoa house, Gameworld, Agodi Gardens, and many more. The state is also the homeland of many prominent people, like Samuel Johnson, Olaniyi Afonja, Samuel Ajayi Crowther, Adebayo Faletiand others.

The affairs of the state are governed by Governor Oluwaseyi Makinde and Deputy Governor Rauf Olaniyan.

Another state that makes up the six geopolitical zone is the Ogun state. It is well known for its slogan, “the gateway state” and has Abeokuta as its capital. It was created in 1976 and shares a border with Lagos state.

More so, the state is blessed with tourist sites like Ake Abeokuta, St Peters cathedral (the first church in Nigeria), Ogun river, and many more. The state can brag about prominent people like Funke Akindele, Fela Kuti, Dimeji Bankole, Laycon, and many more.

The state is made up of 16 Local Government areas, namely: Apapa, Eti-Osa, Lagos Island, Ajeromi-Ifelodun, Surulere, Suburban, Agege, Alimosho, Ifako-Ijaiye, Ikeja, Kosofe, Mushin, Ojo, Oshodi-Isolo, Shomolu, Amuwo-Odofin. The state is blessed with corporations, companies, brands, and industries. This makes Lagos a land filled with opportunities for any individual, in respective of your cultural background.

The affairs of this big state are governed by Governor Babajide Sanwolu and Deputy Governor Femi Hamzat. We must say that Lagos is a state to live in and it is filled with different kinds of tourist centers like The Lekki conservation center, National Theater, the National Stadium, National museum, Palms beach resort, and many more. So, there you have it,  the six states that make up the southwest geopolitical zone in Nigeria.