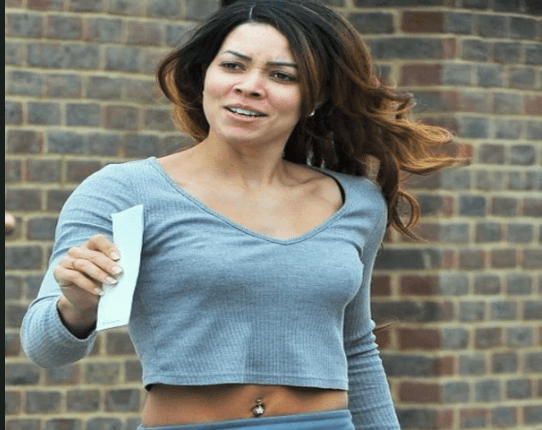 Who is Nicole Osbourne?

Nicole Osbourne first came into the spotlight, following the revelation that she is the baby mama of Anthony Joshua. She is a British Yoga Instructor and was 24 years at the time of giving birth to their love child. Nicole Osbourne and Anthony Joshua were reportedly in an on and off relationship in 2014/2015. The couple met at Kings Langley School, Watford, while Nicole Osbourne was studying there.

Shortly after giving birth, Nicole Osbourne and Anthony Joshua broke apart. However, they kept their love child a secret for six monthly and finally showed him to the world secret a year later.

Not much is known about Nicole Osbourne Biography. However, we already know what She is a yoga instructor and pole dancer. She teaches at the Femme Fitness Gym in Watford and starrs in YouTube pole dancing videos.

Shortly after giving birth, Nicole Osbourne was allegedly living in an emergency shelter with her child. Her home was an aging semi-detached house with a large damp patch on the ceiling. Her love child with Anthony Joshua was only 5 months at the time.

Residents were shocked to see her there. Even as the baby was still a secret, there was no doubt it was Anthony Joshua’s since he was always seen dropping off items at the shelter.

The emergency shelter she lived at was shared by several others. Therefore, she would always keep her bedroom door locked because the home’s other residents would have to walk through to get to the Community utility area.

However, her child’s father was already making a fortune for himself, and so it was stunning seeing her in such precarious state. Some residents who spoke to the The Sun Uk allegedly stated that Nicole was always alone and tired.

Still, weeks after the report by the Sun, it was revealed that Nicole Osbourne had moved into a 500,000 Euros flat in Finchley, North London. The Flat, was later revealed to have been bought by Anthony Joshua. However, when asked to comment on her new and old home, Nicole adamantly said: “I’m not talking about where I was living or anything.”

Nicole Osbourne is not married. However, no one truly knows if this is true or any other information about her personal life. She has managed to keep her life secret. Even the YouTube page allegedly owned by her with her picture on the profile has contains no information till date.

How many children does Nicole Osbourne have with Anthony Joshua?

Nicole Osbourne and Anthony Joshua have only one son together. His name is Joseph Bayley Temiloluwa Prince Joshua.

There are rumors about Nicole Osbourne’s net worth. Her YouTube or Social media pages remain a secret till date. The only thing known about her is that she works at Femme Fatale Fitness Center in Watford. This alone puts her net worth at $2 million.

Anthony Joshua is a British Professional Boxer. His birth name is Anthony Oluwafemi Olaseni Joshua, and he is a Nigerian. He was born on the 15 of October 1989 in Watford, Hertfordshire England, to Robert Joshua and Yeta Odusanya. His mother is Nigerian, while his father hails from Nigerian and Irish descent.

He is a Unified World Heavyweight Champion holding over three of the for major championships in boxing: the WBO Title (since 2018), IBF Title (2016), and WBA Title since 2017.  Anthony Joshua first came to the spotlight following his debut at the Iconic O2 Arena in London.

Anthony Joshua won by kocking his rival, Italian boxer, Emanuele Leo, off at the very first set. Nevertheless, Anthony Joshua had already won the Senior ABA Championships in 2010, after participating in his 18th fight. However, he turned down 50,000 Euros offered for him to fight professionally. He preferred going after some medals such as the gold medal he won at the 2012 Olympics.

Before becoming a Champion Boxer, Anthony Joshua used to work as a builder. He only went into boxing following the suggestion of his cousin. However, he was always good at athletics and soccer, from age 9, but often got into trouble. In 2009, he was sent to Reading Prison because he was always fighting with his mates.

Besides Nicole Osbourne, Anthony Joshua has also allegedly dated the model, Bella Hadid. They first met in 2017 at the GQ Awards. However, not much is known about their love life. After Nicole, he has been linked with the Model, Cara Delevingne,  and X-Factor Judge, Rita Ora.

Despite parting with Nicole, there’s no doubt that Anthony Joshua loves his son. Still, he did not to the world until one year after. However, he has since displayed his intense love for his son in many ways.

Is Nicole Osbourne Dead or Alive?

Nicole Osbourne is alive. However, nothing is known about her, aside from the fact that she is Anthony Joshua’s baby mama. A source has once revealed some insights into Nicole’s life at the moment.

“Nicole’s in a strange place. As a new mum in love with her baby’s father and living in a smart London home, she should be on cloud nine, but it’s hard at times being left to bring up a baby alone”

“He is away training overseas for long periods and has to switch off for months ahead of big title fights. She has had other relationships but deep down knows Anthony is the love of her life.”

Nicole currently lives alone with her child in the home bought for her by Anthony Joshua. However, Anthony Joshua reportedly still lives with his mom in her ex-council flat, although he also owns a mansion. Nevertheless, he is very much involved in the life of his son and finds time to spend with him.

And that’s all we know about Nicole Osbourne Anthony Joshua baby mama. Feel free to drop your comments below.